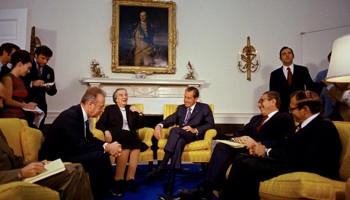 The Obama administration this week declassified papers, after 45 years of top-secret status, documenting contacts between Jerusalem and Washington over American agreement to the existence of an Israeli nuclear option. The Interagency Security Classification Appeals Panel (ISCAP), which is in charge of approving declassification, had for decades consistently refused to declassify these secrets of the Israeli nuclear program.

The documents outline how the American administration worked ahead of the meeting between President Richard Nixon and Prime Minister Golda Meir at the White House in September 1969, as officials came to terms with a three-part Israeli refusal – to sign the Non-Proliferation Treaty; to agree to American inspection of the Dimona nuclear facility; and to condition delivery of fighter jets on Israel’s agreement to give up nuclear weaponry in exchange for strategic ground-to-ground Jericho missiles “capable of reaching the Arab capitals” although “not all the Arab capitals.”

The officials – cabinet secretaries and senior advisers who wrote the documents – withdrew step after step from an ambitious plan to block Israeli nuclearization, until they finally acceded, in internal correspondence – the content of the conversation between Nixon and Meir is still classified – to recognition of Israel as a threshold nuclear state.

In fact, according to the American documents, the Nixon administration defined a double threshold for Israel’s move from a “technical option” to a “possessor” of nuclear weapons.

The first threshold was the possession of “the components of nuclear weapons that will explode,” and making them a part of the Israel Defense Forces operational inventory.

The second threshold was public confirmation of suspicions internationally, and in Arab countries in particular, of the existence of nuclear weapons in Israel, by means of testing and “making public the fact of the possession of nuclear weapons.”

Officials under Nixon proposed to him, on the eve of his conversation with Meir, to show restraint with regard to the Israeli nuclear program, and to abandon efforts to get Israel to cease acquiring 500-kilometer-range missiles with one-ton warheads developed in the Marcel Dassault factory in France, if it could reach an agreement with Israel on these points.

Israel’s policy of nuclear ambiguity – which for the sake of deterrence does not categorically deny some nuclear ability but insists on using the term “option” – appears, according to the newly released documents, as an outcome of the Nixon-Meir understandings, no less than as an original Israeli maneuver.

The decision to release the documents was made in March, but was mentioned alongside the declassification of other materials less than a week ago in ISCAP, which is headed by a representative of the president and whose members are officials in the Department of State, Department of Defense and Department of Justice, as well as the intelligence administration and the National Archive, where the documents are stored.

The declassified material deals only with events in 1968 and 1969, the end of the terms of President Lyndon Johnson and Prime Minister Levi Eshkol, and the beginning of the Nixon-Meir era. However, it contains many contemporary lessons. Among these are the decisive nature of personal relations between a president like Obama and a prime minister like Benjamin Netanyahu; the relationship between the diplomatic process of “land for peace,” American guarantees of Israeli security in peace time, supplies of weapons to Israel and Israel’s nuclear status; and the ability of a country like Iran to move ahead gradually toward nuclear weapons and remain on the threshold of military nuclear weapons. 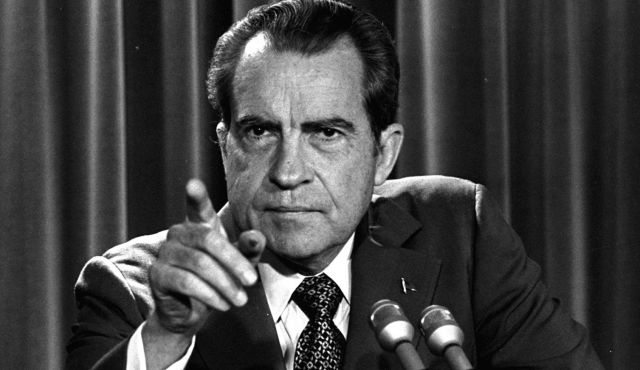 In the material declassified this week, one document was written by senior officials in the Nixon administration in a working group led by National Security Advisor Henry Kissinger, exploring the nature of the Israeli nuclear weapons program known as “NSSM 40.” The existence of the document and its heading were known, but the content had so far been kept secret.

The document was circulated to a select group, including Secretary of State William P. Rogers, Secretary of Defense Melvin Laird and CIA director Richard Helms, and with the knowledge of the chairman of the Joint Chiefs of Staff, Gen. Earle Wheeler. In it, Nixon directed Kissinger to put together a panel of experts, headed by Assistant Secretary of State Joseph Sisco.

The experts were asked to submit their intelligence evaluations as to the extent of Israel’s progress toward nuclear weapons and to present policy alternatives toward Israel under these circumstances, considering that the administration was bound to the pledge of the Johnson administration to provide Israel with 50 Phantom jets, the diplomatic process underway through Rogers, and the aspiration to achieve, within the year, global nonproliferation – all while, simultaneously, Israel was facing off against Egypt on the Suez Canal during the War of Attrition.

The most fascinating parts of the 107 pages discuss internal disagreements in the American administration over how to approach Israel – pressure or persuasion, as Sisco’s assistant, Rodger Davies, put it in the draft of the Department of State document. Davies also formulated a scenario of dialogue and confrontation with Israel’s ambassador to Washington, Yitzhak Rabin, the IDF chief of staff during the Six-Day War, who continued to sign his name using his military rank of Lieutenant General.

The documents are an intriguing illustration of organizational politics. Unexpectedly, the Department of State’s approach was softer. It opposed threats and sanctions because of the fear of obstructing Rogers’ diplomatic moves if Israel hardened its line. “If we choose to use the maximum option on the nuclear issue, we may not have the necessary leverage left for helping along the peace negotiations,” Davies wrote.

The two branches of the Pentagon – the civilian branch headed by Laird, his deputy David Packard (a partner in the computer manufacturer Hewlett-Packard, who objected to a previous sale of a super-computer manufactured by Control Data to Israel, lest it be used for the nuclear program) and their policy advisers; and the military branch headed by Gen. Wheeler – were more belligerent. Laird fully accepted the recommendation of the deputy secretary of defense in the outgoing Johnson administration, Paul Warnke, to use supplying the Phantoms to leverage far-reaching concessions from Israel on the nuclear issue.

Packard’s opposite number in the Department of State – Rogers’ deputy, Elliot Richardson – was Packard’s ideological ally in reservations regarding Israel. However, Sisco’s appointment, rather than an official from the strategic section of the Department of State, which agreed with the Pentagon, steered the recommendations of the officials toward a softer stance on Israel.

There was also an internal debate in the American administration over the extent of Israel’s progress toward a nuclear weapon. The Department of State, relying on the CIA, strongly doubted the evidence and described it as circumstantial in light of the inability to collect intelligence, including during the annual visits to the Dimona facility. As to conclusive evidence that Israel had manufactured a nuclear weapon, Davies wrote, “This final step is one we believe the Labor Alignment in Israel would like to avoid. The fierce determination to safeguard the Jewish people, however, makes it probable that Israel would desire to maintain the ultimate weapon at hand should its security again be seriously threatened.”

The Department of Defense, based on its intelligence agency, was more decisive in its evaluation that Israel had already attained nuclear weapons, or would do so in a matter of months.

Rabin, with his military aura and experience in previous talks on arms supplies (Skyhawks and later Phantoms) with the Johnson administration, was the key man on the Israeli side in these discussions, according to the Americans. This, even though the decisions were made in Jerusalem by Meir, Defense Minister Moshe Dayan, Foreign Minister Abba Eban and their colleagues, who were not always happy with Rabin’s tendency to express his “private” stances first and only then obtain approval from Jerusalem.

The Johnson and Nixon administrations concluded that, in talks with Rabin, it had been stated in a manner both “explicit and implicit” that “Israel wants nuclear weapons, for two reasons: First, to deter the Arabs from striking Israel; and second, if deterrence fails and Israel were about to be overrun, to destroy the Arabs in a nuclear Armageddon.”

The contradiction in this stance, according to the Americans, was that Israel “would need a nuclear force that is publicly known and, by and large, invulnerable, i.e., having a second-strike capability. Israel is now building such a force – the hardened silos of the Jericho missiles.”

However, “it is not really possible to deter Arab leaders – and certainly not the fedayeen – when they themselves represent basically irrational forces. The theory of nuclear deterrence that applies between the U.S. and the U.S.S.R. – a theory that requires a reasoned response to provocation, which in turn is made possible by essentially stable societies and governments – is far less applicable in the Near East.”

Four years before the Yom Kippur War in October 1973 and the general scorn for Egyptian President Anwar Sadat, the Nixon administration wrote that Israel “would never be able to rule out the possibility that some irrational Arab leader would be willing to sustain great losses if he believed he could inflict decisive damage on Israel.”

Sisco and his advisers worried that a threat to cut off arms supplies “could build military and psychological pressures within Israel to move rapidly to the very sophisticated weaponry we are trying to avoid.”

According to the documents, the Nixon administration believed that Israel’s acquisition of nuclear weapons would spur the Arab countries to acquire their own such weapons within 10 years, through private contracts with scientists and engineers in Europe. Moreover, “deeply rooted in the Arab psyche is the concept that a settlement will be possible only when there is some parity in strength with Israel. A ‘kamikaze’ strike at the Dimona facilities cannot be ruled out,” the document states.

The Nixon advisers concluded that, all things considered, “we cannot force the Israelis to destroy design data and components, much less the technical knowledge in people’s minds, nor the existing talent for rapid improvisation.” Thus, Davies wrote in July, two months before the Nixon-Meir meeting, the lesser evil would be to agree for Israel to “retain its ‘technical option’” to produce nuclear weapons.

“If the Israelis show a disposition to meet us on the nuclear issue but are adamant on the Jericho missiles, we can drop back to a position of insisting on non-deployment of missiles and an undertaking by the Israelis to keep any further production secret,” Davies added.

The strategic consideration, mixed with political considerations, was persuasive. The draft of Meir’s unconditional surrender – formulated in the Pentagon without her knowledge in her first month in office – was shelved, and the ambiguity option was born and lived in secret documents until the Obama administration made them public, for reasons (or unintentionally) of their own.